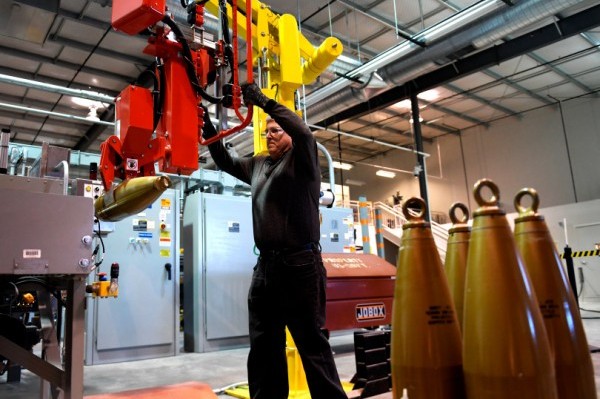 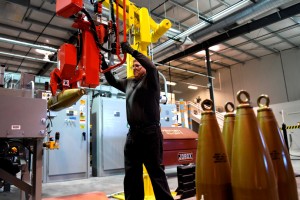 PUEBLO – Destroying the nation’s stash of World War II-era chemical weapons is nasty work, and after decades of delays, the Army is using robots to start the job inside a $4.5 billion plant on the Colorado prairie.

A newly trained human workforce of 1, 400 controls the robotic machinery — one canary-yellow, long-armed device is dubbed Inga, another Igor — beginning a mission of emptying 780, 000 wine-bottle-shaped projectiles inside sealed chambers behind 24-inch-thick blast walls. The process minimizes human contact with deadly chemicals known as mustard agent, which was used to deny enemies access to land by attacking their eyes, skin and lungs.

“I like the work. This stuff has been sitting around 40, 50 years. It’s about time we got to destroying it, ” said Jose Rosario, 33, an Army war veteran who in Iraq found a stash of Saddam Hussein’s weapons.

“These robots were built for precision, all computer programmed. I don’t have any worries that the machines will make mistakes, ” Rosario said during training.

The destruction, ordered by Congress in 1986, entered a pilot testing phase last week that, as of Wednesday, has dismantled 80 projectiles at the Pueblo Chemical Depot, located on windswept prairie where tumbleweeds roll and antelope nibble dry grass. 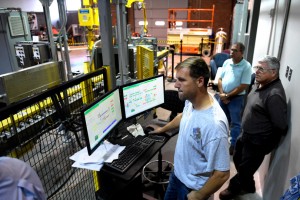 “We’re going to make the world cleaner by having this stuff go away, and go away the right way, ” he said.

A 1997 international treaty ordered eradication of chemical weapons,  outlawed since 1925, and the United States as an original signatory is obligated to comply. Foreign observers are posted at this plant to verify destruction of the weapons. In recent years, concerns about the delay intensified amid cybersecurity threats and evidence that Islamic State and Syrian forces have used chemical weapons.

Pentagon officials initially planned to install an incinerator in Pueblo. But Congress intervened in 1996, responding to public concerns about safety, ordering a program to demonstrate at least two alternative systems, other than incineration, for destroying chemical weapons.

Project leaders settled on the current low-temperature, low-pressure system that neutralizes the chemicals and then unleashes bacteria – from sludge imported from Pueblo’s wastewater treatment plant – to eat the weapons out of existence.

No liquid waste will remain at the Pueblo Chemical Depot, and a “salt cake” sludge from filters will be hauled to a hazardous waste landfill. Emissions are filtered from a black stack above the facility.

Colorado Department of Public Health and Environment hazardous materials and waste management officials have inspected the facility to ensure safety. The pilot testing is being done under a research, development and demonstration permit, CDPHE spokeswoman Jeannine Natterman said.

The CDPHE “does not believe the Pueblo Chemical Agent Disposal Plant will have a significant impact on air quality, ” Natterman said in an e-mailed response to The Denver Post.

The plant “is considered only a minor source by the air pollution control division, ” she said. State inspectors also are “overseeing the collection of air samples from plant emission sources during pilot-testing of the facility.”

Today, an estimated 2, 611 tons of the mustard chemical agent is stored in projectiles and mortar cartridges buried in igloos at the 35-square-mile Pueblo Chemical Depot.

In 1952, the Army began storing mustard agent hauled here from a manufacturing plant called the Rocky Mountain Arsenal northeast of Denver. A staff of about 250 guards and maintains the weapons. Guards have detected and dealt with at least 90 leaks over 35 years.

Five of the 12-foot-tall yellow robots, run by workers at keyboards, open the projectiles packed with liquid mustard agent, which freezes at 56 degrees. The robots unscrew and remove caps on each projectile, drain the liquid into titanium containers. Robots later inject 190-degree water and sodium hydroxide. Then the bacteria from sludge is used to eat broken-down chemicals.

The project brings total employment at the Army’s depot to nearly 2, 000, ranking it among the largest employers on Colorado’s economically lagging southern Front Range. New jobs pay $40, 000 to $70, 000 a year, plus health benefits.

“It means a lot, ” said Kurtis Wolf, 35, a union worker at the Russian-owned Evraz steel factory until that operation recently ran into trouble.

Wolf said his wife a couple months later lost her job at a dental office, jeopardizing the situation for their three children.

“Now I have a job, stable income, ” he said. “We’ll be able to keep paying for our house, for the vehicles. … Lord willing, I hope to be one of the guys who helps close this place down.”