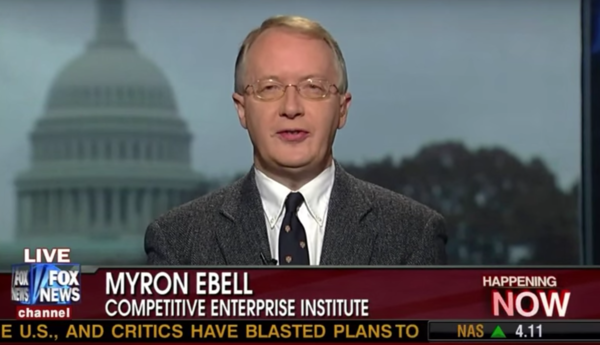 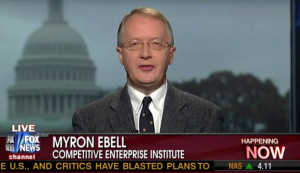 In the midst of a tumultuous start to Donald Trump’s presidential administration, you may have missed the stories about him. Let me recap. Ebell is a renowned climate denier, lobbyist, long-time D.C. talking head and, sadly, a supporter of many polluting energy companies.

That’s right. President-elect Trump chose a science skeptic and ally to companies with long histories of pollution to start his EPA.

The Environmental Protection Agency plays a vital role in protecting the air we breathe, the water we drink and the climate on which we rely. Ebell, however, denies the science of climate change. He opposes policies to protect clean air and water. He has a history of supporting policies that protect polluter profits over public health. In fact, he directs the Center for Energy and Environment at the Competitive Enterprise Institute, which received donations from polluters like Exxon and Murray Energy.

Now more than ever, we need a strong EPA. As 97 percent of scientists agree, climate change is real. It’s here and it’s doing damage. It’s expected that 2016 will be the hottest year on record. Sea levels continue to rise as coastal towns flood on sunny days. Extreme weather events like Hurricane Sandy and the Ellicot City floods happen not once-in-a-thousand years but seemingly every other. Asthma rates climb, especially in communities of color, as climate change degrades air quality. Mosquito borne illnesses grow as warmer weather lingers longer into fall.

Even the water in our homes and our schools isn’t safe. Just ask the people of Flint. Incredibly resilient people who I have had to chance to meet on many occasions.

The American people need a strong EPA. We especially need strong climate champions. Myron Ebell is the exact opposite.

But Ebell is only the head of the transition team, right, and not the actual EPA administrator who sets policies? First, he could still be administrator. He’s on President-elect Trump’s short list. But for now, yes, he’s hiring the staff — Myron supporters everywhere. He’s setting the early priorities too — and those won’t include cutting carbon pollution for the 68 percent of African-Americans who live within 30 miles of a polluting coal-fired power plant.

Finally, and most importantly, I think of the old line: actions speak louder than words. President-elect Trump picked a climate denier and science skeptic to set up his EPA. He is favoring a system that could hurt the American people and make lots of money for the polluters. So while with his words, Donald Trump promises to be a president for all, his actions make clear he’ll only be a president for the powerful and the polluters.

Donald Trump won the presidency (although not the popular vote) on his personality and his promises to change Washington. The American people didn’t send him to the White House to roll back pollution limits or public health protections. Actually, a vast majority of Americans support action to address climate change. A majority of Republicans do too.

So if Donald Trump truly wants to be a president for the people, he should empower the EPA, not eviscerate it. President Trump should maintain the EPA’s Clean Power Plan: established in 2015 to combat climate change, cut carbon pollution by nearly a third and boost clean energy. He should examine government subsidies to the meat industry, an industry which is inhumane and which also contributes more to climate change than most people understand. And importantly, he should end Myron Ebell’s tenure atop EPA during the transition, not extend it into his administration.

In an open letter earlier in November, I urged President-elect Trump to break from the traditional molds of party politics and do right by the American people. He did the opposite. Donald Trump must not allow the special interests he promised to combat during his presidency instead control his administration. Appointing a polluter-friendly, D.C. insider is not what the American people want. Protecting polluter profits over public health isn’t either.

It’s only November, but for polluters, Christmas came early. For the good of the American people, however, let’s hope Myron Ebell isn’t at the EPA past New Years.